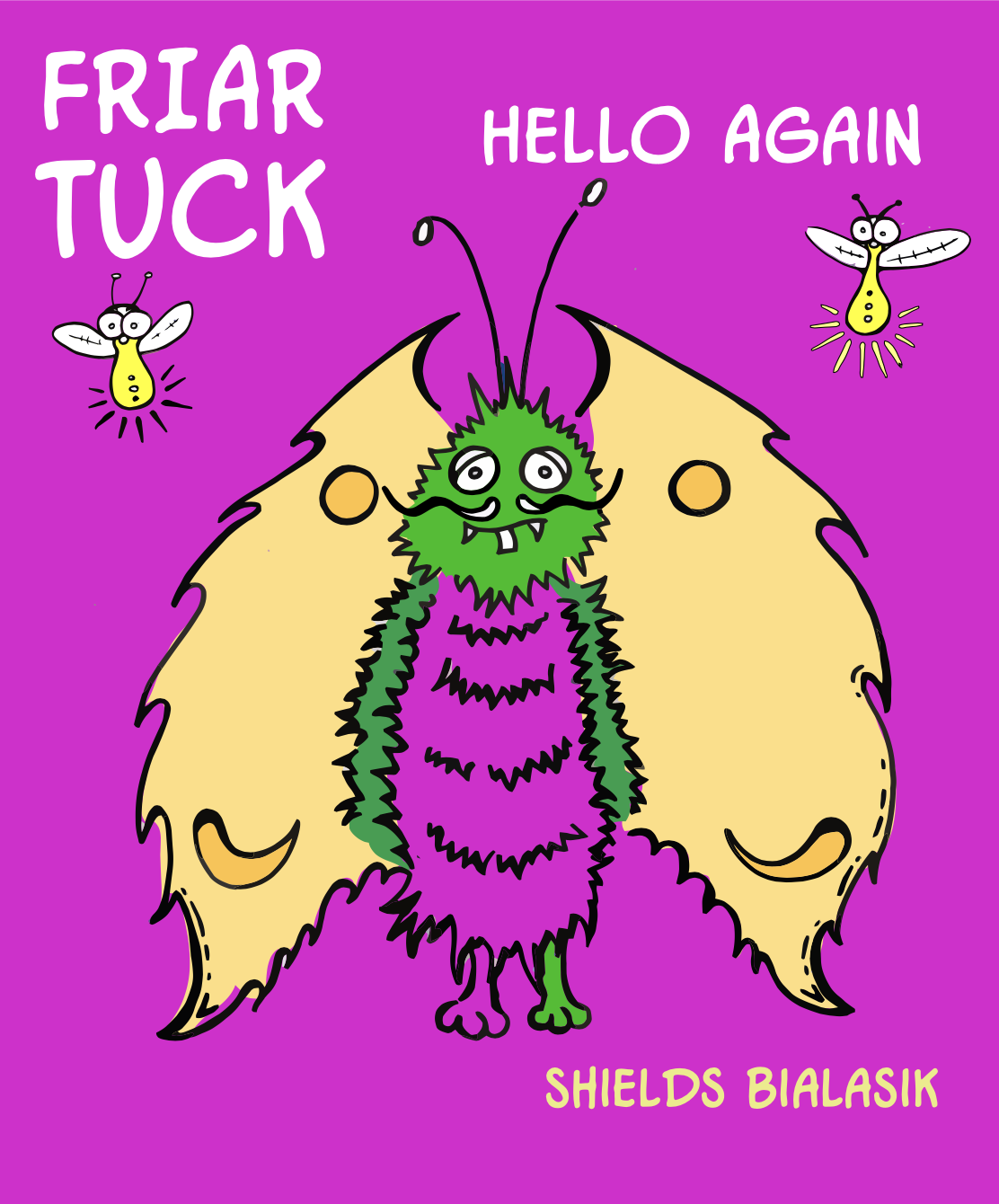 It was early in the evening, the sun had now set and the first beams of moonlight were starting to appear. Friar Tuck and Ralph were sitting out on their back porch, waiting… and WATCHING.

They did this after long, hot summer days, especially like today. Tonight, however, was special. Tonight was the night when the fireflies were expected to arrive. Friar Tuck and Ralph were very excited and had decided to stay up late and keep their eyes open for the first flashes of light from the little critters.

Unfortunately, they had gotten their dates mixed up the night before and ended up staying up almost half the night before they decided to go to sleep. Tonight, however, was the night. Friar Tuck had checked it twice on the calendar and it was without a doubt that they would appear.

The crickets were active this evening, singing songs and telling endless stories, just like they do all around the world. The evening air was still and darkness surrounded Friar Tuck and Ralph.

“I want to be the first to see a firefly tonight,” Friar Tuck suddenly said.
“It’s good luck and I need some luck.”

“Yeah,” said Ralph, especially after that water balloon incident today.
“Eww Yuck,” lifting his rat paw to his nose and giving it a good sniff.

The water balloon incident, or should I say disaster, had been quite stinky!

Friar Tuck was silent for a moment.
He thought he had seen something in the distance.

Could it be the fireflies?

Then, just as if on command, a flash of light sparkled in the darkness.
It was a firefly!

Friar Tuck and Ralph jumped into the air with delight.
“Hello Fireflies,” Friar Tuck yelled loudly. He had interrupted the orchestra of crickets with his yell and they  quickly became quiet.

“Quiet, Friar Tuck, you’ll scare them away,” Ralph said; but seconds later, there was another flash of light, and then another. The fireflies had officially arrived for the summer and now the darkness burst into a magical display of flashing spots of light.

“I feel like we are living in space and we have stars all around us,” Friar Tuck said.
Friar Tuck had now run out into the middle of the lawn and was lying down, looking up into the sky.

“Hey, wait for me,” said Ralph, now putting on his shoes and trying to find where Friar Tuck had gone.

Typically, rats have pretty good vision at night, but the flashing of the fireflies’ lights had temporarily blinded Ralph as he stepped right on top of Friar Tuck.

“Shhh… Friar Tuck…
“It was an accident,” Ralph said.

He was now standing up again, trying to find a good place to sit down.
Friar Tuck was in the grass looking up at Ralph when he suddenly saw something unusual flying in the air.

“Um… Ralph, are there bats around here?”
Friar Tuck was very curious because he had just seen something big and large fly right over the top of Ralph’s head.

“No,” said Ralph. “Maybe on Halloween,” he was laughing now.
Friar Tuck, however, was not laughing. Instead, he was staring straight up behind Ralph and watching a very large and odd shaped creature flying around.

“Ummm, Ralph,” he said, “you better look behind you.”
“Ahhh, Friar Tuck, stop kidding around.”

And then he heard it. As if flapping directly in his ear and fluttering against his cheek.
Ralph froze absolutely still.

Now, I’m not sure if you’ve ever been grazed by a bat, in the dark of the night; but it can be an exciting moment.

“Who is?”
“THE BAT OF COURSE,” yelled Friar Tuck!
And he yelled loud, very loud.

I still wonder whether it was the way Friar Tuck said it or the simple use of the word BAT that had Ralph running faster and jumping higher than he probably had in his entire life.

Ralph was in an absolute panic.

First he screamed, then he jumped up and down, and then… he started to run.
He was running so fast around the yard that fireflies began to get stuck to his hairy body.

Friar Tuck was laughing; he had never seen something so funny.
Ralph looked like a runaway Christmas tree full of Christmas lights.

“I should say that more often,” he said to himself.
“Ralph needs a little exercise now and then.”

And well, that bat, it turned out to be an oversized GARDEN MOTH. A nocturnal one, or the type that like to come out at night.

Ralph didn’t hear Friar Tuck though.. Instead, he only heard the ONE word, “BAT.”

This made him run even harder and now he started spinning.
He was spinning around so fast, waving his hands in the air and jumping up and down that he now looked like a wild fire dancer.

“Watch Out,” yelled Friar Tuck, but it was too late.

Ralph had spun himself right into a bush.
He fell to the ground and lay still.

The fireflies had been scattered throughout the bush, which was now glowing brightly.
“Wow,” said Friar Tuck.
“Bet you can’t do that again!”

Ralph didn’t say a word, he was exhausted.
“I’m ready for bed,” he said.

Friar Tuck reached his arm out to Ralph and then helped to gently remove the remaining fireflies.
Once they were inside, they headed upstairs to begin their evening bedtime routine.

Of course, they had to brush their teeth, wash their hands and do all that stuff YOU DO before YOU GO to bed.

Once Friar Tuck and Ralph had finished washing up, they jumped into their pajamas and then headed for the bathroom. It was time to brush their teeth. Tooth brushing was always a favorite time of day for Friar Tuck and Ralph who had one thing that they both shared in common.

They loved to eat the toothpaste!

Friar Tuck always ate his toothpaste quickly, while Ralph liked to savor his and take more of a connoisseur’s approach to the experience. Together they would each use one tube of toothpaste per week, and on top of that they had sparkling white teeth!

The brushing/eating process normally took about 30 minutes to complete, sometimes a bit longer for Ralph if he was having an especially delightful day.

First, the top teeth, then the bottom teeth, next the tongue, followed by one last bite to eat, and a cold swig of water.

Do you spend 30 minutes brushing your teeth?
Do you eat the toothpaste?
Hmm… you better talk to your dentist about this.

Finally, Friar Tuck and Ralph were finished, and ready for bedtime.
Friar Tuck was in the top of the bunk bed, while Ralph took the bottom bunk.

Then there was silence…
For about 10 seconds that was before Friar Tuck started talking again.

“Hey Ralph, what should we do tomorrow?”
“I don’t  know,” said Ralph, “maybe we should build a rocket?”

“That sounds like a great idea,” Friar Tuck said…

Now, just because Friar Tuck and Ralph went to bed doesn’t mean they actually went to sleep. This was always the best time for talking, and they would then talk for hours and hours and hours… before finally one of them would fall asleep.

I think some of you kids out there might know exactly what I’m talking about. Bedtime is always the best time for funny jokes, interesting sounds, and of course great ideas. These all happen right before you fall asleep and, well, it had reached this time for Friar Tuck and Ralph.

Friar Tuck and Ralph both sat up in bed and looked towards the window, and there it was.
It was the giant moth from the garden. The moth which had turned Ralph into a wild firefly dancer.

It was outside the window, flying in place and tapping its wings against the window.
“What in the world,” said Friar Tuck.
“What’s he doing?” said Ralph. “I was almost asleep.”

“I’m not sure,” said Friar Tuck, “but I think he’s trying to tell us something.”
Friar Tuck climbed down from the top bunk and then walked over to the window.

“Hey Ralph, come check this out; I want to show you something.”
Ralph was slow getting out of bed, but he eventually made his way over to the window.

“Look,” said Friar Tuck.
“Do you recognize anything familiar?”

Friar Tuck was pointing directly at the moth now on the opposite side of the window.
“I don’t see anything,” Ralph said, now pressing his face up against the window.

Indeed, it was Fat King Max.
He had returned to say hello!

Friar Tuck and Ralph jumped with delight.
Fat King Max was now flapping his wings with even more excitement outside the window.
He was hovering, as if suspended in space.

“He’s beautiful,” said Ralph…
“Yeah,” said Friar Tuck… “Not half as ugly as I had expected and look at him either.”

“AND…HE CAN FLY!!”
And it was true. Fat King Max could fly and he was beautiful… in that unique sort of way.

That night, King Max flew all around the garden, doing swan dives, flips, and twists. He was pollinating the wild flowers. Friar Tuck and Ralph watched silently from the bedroom window.