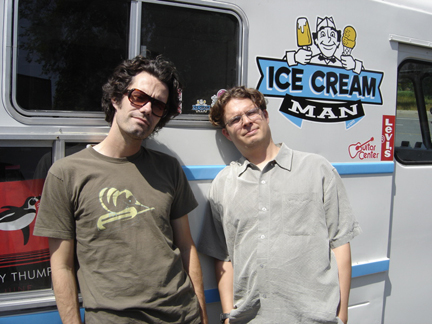 Back in 2006 when I was still working with Passport2, we were publishing a monthly insert in the Sneak Preview. The insert had been created out of the extra sheet of paper coming off of Rhonda Lewis’s monthly Real Estate Review. I had arranged with a friend of mine, Bob Weimer of Weimer Enterprises in Medford; to print Rhonda’s Review at a discounted rate in exchange for the additional piece of paper that was trimmed off the end.

I then utilize this extra piece of paper as an insert, to Rhonda’s insert which was then inserted into the monthly Sneak Preview newspaper in Ashland Oregon. (Kinda Tricky 🙂  – Just Resourceful – Learned From My Journal and Card Business)

Passport2 then used this monthly insert to promote some of our upcoming events on one side of the paper while donating the other side of the paper to a different nonprofit monthly. In total we must’ve ran about 12 different issues. I’ll need to go back and post the correct number here shortly.

(((Shields Insert Count on How Many Passport2 Inserts You Created)))

Each month I would try and create new and exciting inserts. My favorite and most original insert was that of a paper airplane with instructions. I basically had total creative freedom and in available audience each month which motivated me to do new and exciting things.

If you’ve read this far you’re probably wondering why the heck I’m talking about this when I have a picture of myself an ice cream man posted. Well there’s a reason for that, and that reason is that my first meeting with Ice Cream Man actually came through an announcement I made in the Passport2 Monthly Insert.

It must’ve been the summer of 2006 that I began spotting a small ice cream truck driving around Ashland with this goofy looking guy sporting sunglasses and some crazy hair. Everywhere I was going he seemed to be popping up and driving around. He seemed overly happy and was always singing. I was curious. Was this guy a total idiot? Or who the heck was he?

I decided to post a small notice in the Passport2 insert which made the announcement that I wanted to meet Ashland’s Ice Cream Man. It wasn’t but a week later, that I spotted the ice cream truck cruising down my street. I ran after it and flagged down the driver and thus began my friendship with Matt Allen a.k.a. IceCreamMan.com.

Matt was still in his early days preparing to launch IceCreamMan.com nationally. I liked the idea of giving away free ice cream to people for absolutely no reason. This this would be a hard equation for people to decode, something ahead of its time, and certainly something I wanted to get behind to promote and support.
I immediately got Passport2 involved with supporting the second annual ice cream social. Running promotion and brining in sponsorships. Matt got his expenses covered and the sponsors got some great exposure. Those original sponsors were. The Stratford Inn, Today’s Dentistry (Dan Marut DMD) and then Rhonda Lewis.

The story the first ice cream social in Ashland Oregon is simply classic. Matt was having such a difficult time selling ice cream  and making a living that he came to the conclusion that she should just give it away for free by having a giant ice cream social. The idea was such a success that he decided to carry on with it year after year and I have now been involved with supporting it and promoting it in Ashland every year since 2006.

One memory I have was sitting with Matt in the upper lobby of the Stratford Inn, now Boulevard coffee. Matt was talking about live casting from a ice cream truck while driving around the country and hosting free ice cream socials. It was a fun time and I was able to connect Matt with several people in Ashland one in specifically who would go along with Matt on some of his first adventures, and that was Jay Newman.

I also remember Jay, Matt, and I were hanging out at Jay’s apartment in downtown Ashland. We were talking about some of the base ethics and business models for ice cream man. Maybe Matt should dress in an ice cream man outfit and never take it off for the rest of his life, or maybe we should allow people to vote online where the next ice cream social would be hosted. How to find sponsors? How to get into events and how to pull it off?

A few weeks later Matt and I worked late into the night building and launching one of the first in-depth websites for Icecreamman.com. If I can remember correctly it was for the Coachella Review. We built a site using article manager it was quite an undertaking. I took my experience from building Passport2 on article manager and utilize this to build that site. It was all volunteer, or actually I think I might’ve been paid a little not sure…

Yes, that’s correct I think that he did pay me. My days of working for free had already come to an end. Not saying that in a bad way, but just reflecting that I had decided that any project I was going be a part of I would either get paid for in cash or in equity.

There was a lot of pushing pressure for Matt iand the crew to get ready for the Coachella review. I remember Jay traveling along with Matt to go photograph as well as several other photographers. Matt was amazing at getting people to help him into real inspiration for me in developing my citizen journalism media model. In fact it was Matt Allen who demonstrated to me how to get people behind you in supporting a project, which is a lot of the way I’ve created the models for collecting citizen media through LocalsGuide™.

Matt was also an awesome executioner. He was absolutely dependable and trustworthy. I knew if he told me he would be in Miami Beach standing on the boardwalk in the morning that he would be. The guys an endurance machine, crossing the country twice on bike. Hiking the Appalachian and Pacific crest Trail. He has real staying power which is a rare quality to find in humans these days.

I think part of the initial spark that attracted me and connected me to Matt was the fact that he was out there living his life, trying something that no one else had done, and not worrying whether he succeeded or failed. Most people simply lie still dying before they are even alive.

The funny thing was,we were inserting stock photographs we found through Google Images and populating the site as if it had existed all along. It was a brilliant idea and we simply swapped out the stock photographs with original pics from the ice cream crew as the photos were generated. This was a giant lesson to me because I was a bit concerned with copyright issues and putting the brakes on the project in that way.

I think some of the lesson was build it and worry about the consequences later. You can always say I’m sorry, take down the images and quickly swap them out with original ones. It worked, no one noticed, and the site looked awesome. The funny thing about the review is that Matt and the Crew ran into some major internet connectivity problems… think they also got a flat tire too… not sure… but I ran the site with live updates from Ashland.

I’ve spent several summers welcoming Matt back to Ashland. Eating at our favorite restaurant, Wiley’s World. A few times he had driven the entire country from New York to Ashland just to do the social. Many times I wondered if he would make it or if the ice cream truck might break down. It never did, and whether Matt, had to sleep on top of his freezers, camp outside, or pick up dry ice and some random location in who the hell knows where he always made it.

One summer Matt rolled into town with Lyme disease, he was feeling like hell and looked like it to. I had a friend of mine come over and do Bowen Body work treatment on him as he lay on the floor in my house. Three hours later he was all smiles at the social giving ice cream to kids.

This story is far from over and I’ll add a bookmark to myself here to add more in later.