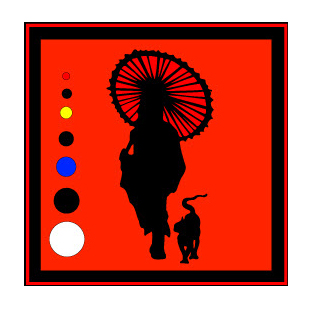 This is one of my favorite silhouette compositions created for the “Global Pop” series. A series of 21 silhouettes which I designed in 2002. The silhouette of the figure was pulled from a photograph in which a group of Budhist monks are walking in the rain. The image of the cat is pulled from a 19th century Impressionist painting.

Neither of these objects were silhouettes before I transformed them. This image was sold on a series of journals, pocket notebooks and then probably a few magnets.
My favorite element of this composition is the cat’s tail and the transparencey of the umprella against a strong red and black background.